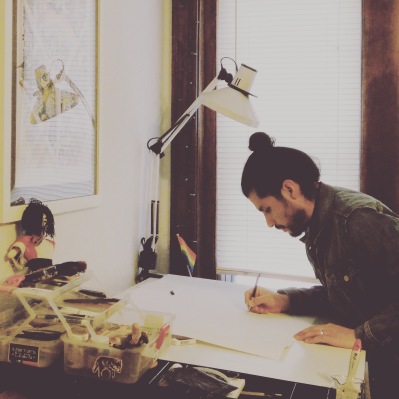 A self-taught artist from Mexico City, Gerardo’s primary media are graphite, pen & ink, acrylic paint, and watercolor on paper. With these tools he crafts kaleidoscopic vignettes coupling the repetition of geometric shapes and patterns with surreal, kaleidoscopic visuals. Out of the stark polygons and their regular dimensions spring forth anatomical depictions of insects and birds, bones and remains among fruits and fungi; interspersed with more sacred geometries and jutting architectural marvels and even entire civilizations. His work weaves Mexican iconography, sacred geometry, surrealism, and local environmental influences into highly detailed pieces that allow the viewer to explore the complex relationship between human perception and experience. His influences range from Tobias Rehberger and Hieronymous Bosch to M.C. Escher and Jean-Michel Basquiat.

The fourth of seven children raised in poverty by a single mother, Gerardo began balancing school and a job at age six. Through a middle school art class he found a sense of peace in the creative process, inspiring his exploration of a range of media. After honing his skills in the Mexico City graffiti scene and Mexican folk art, his primary focus transitioned and his unique drawing style developed to process the whimsical and macabre world around him.

Gerardo left Mexico City to move to the U.S. in 2013 and currently resides in New Haven, CT. His works have been shown in various solo and group gallery exhibitions in Mexico and the U.S., including “Proyecto VASIMR®” at Centro Cultural Border in Mexico City; “Art of the State” at the State Museum in Harrisburg, PA; “New New England” at Gallery 263 in Cambridge, MA; “Doors & Windows” (Solo Show) at The Gallery 4 in Pittsburgh, PA; and “End of the Road” at sidewall: a curated mural exhibition space in Pittsburgh, PA. He also has a piece in the permanent collection of Susquehanna University’s Lore Degenstein Gallery.